The Director’s Approach – Our Country’s Good 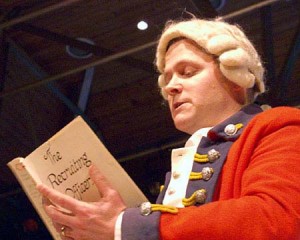 I have for a long time wanted to direct ‘Our Country’s Good’. It’s such a wonderfully uplifting play; poignant and extremely funny.

From the outset I decided I wanted to emphasise the Australian setting and heighten the Aboriginal element of the play. The set design and lighting were essential ingredients to this. I wanted a sense of the space of Australia, yet also the feeling that the convicts and the officers are all trapped. The space is threatening rather than liberating. I also wanted a feeling of heat and arid dryness. Here lighting and sound come into their own. So much can be achieved with all these elements and once the actors are out on that stage their performances are heightened. I won’t say too much here about what the design looks like as our designer Alex will also shortly be writing a piece about his approach.

As far as my directorial method is concerned (and yes that sounds rather precious I know), the only way I can describe it is to say it is ‘layering’. I feel that each time we rehearse we add more layers, starting with a very basic rough layer, and refining things as we progress.

The first thing I do before even the rehearsal room is visited is to read the text many times and make notes on characters, story, structure, themes and language. If a play is good I’ll keep on finding things I missed in previous readings, and then I’ll find out more when the actors point out things that I had missed or not considered. I do like an element of spontaneity so I never want to be too prescriptive. I have often been overruled by an actor and that’s a good thing.

Rather than move to the text straight away with the actors though I like to explore the themes in workshops first. I prefer to hold workshop style auditions as I think they are far more revealing about what an actor can do than someone coming along with a prepared speech. It’s more interesting too.

Having got this ‘feel’ for things I then move to a reading of the play with the whole cast and we’ll further discuss character, themes etc together. The next layer is where we start to work on sections of the play, scenes or collections of scenes. The play has to be ‘blocked’. I hate this term and would prefer to say we get the play on its feet. This first attempt at ‘moving’ the play is obviously another very rough layer. I can’t work by having all moves mapped out, so I ask the actors to walk through a scene, even a very complicated one and just see what happens. It can often look very static and it can often look a mess, but it’s an important process because the actors themselves get to know how the scene works and what the ‘logistics’ are and it’s usually the actors who come up with all the solutions. I’m just there to have an overview and perhaps move things around slightly. Once we have this very rough blocking, I’ll start to work more closely with characters on scenes, conversations and speeches. I feel I have to have this ‘throughput’ first though. I’ll often just concentrate on another ‘layer’ perhaps a particular character or a feeling and let other things go, making a note to come back to it later when the next layer is added. It sounds like a very labour intensive process and it is, but it does yield results. Once we get to this stage we’ll start to look at the text far more closely. Also one of my favourite ways of exploring character is by ‘hotseating’. For anyone who has never used this technique, it’s where a character is asked lots of questions to do with their life in the play, and beyond it, by an audience ( usually the other members of the cast) and they have to answer as their character would have done. It means that the actor really has to build up a believable picture for the character and think about how they got to the point they are at in the play.

I’ll also let an assistant director take a scene away to add more layers and tweak things even more. This can only work though if the director can let things go slightly. It can also be difficult if the cast feel that the two directors are at opposite angles and one keeps changing what the other has done. There is also nothing more frustrating than two directors contradicting one another as a scene is being rehearsed. One has to be able to experiment and take wrong turnings without someone interrupting! That is not to say though that suggestions are not welcome, but I’m particularly keen that they should come from the cast as they find out more about their relationships on stage with other characters. Moves that have been in place for weeks can suddenly be changed because the actors have discovered a better way of doing things.

By the time we are well into rehearsals many ‘layers’ have been added and I’ll still be using ‘hotseating’ and questioning. Often as a scene is being played, I’ll suddenly stop and ask the character questions. It just keeps everything ‘on the boil’. Theatre is live so things keep changing and being added and it’s this that makes it so exciting.

Directing is a strange business and it can often look as if you are not doing very much as you let the actors find their solutions, but actually this is far harder than being totally prescriptive. However I do have to be honest and admit that the above is how I like to work but sometimes due to shortness of time I have been known to be a little bit prescriptive and even bossy! Heaven forbid!!!