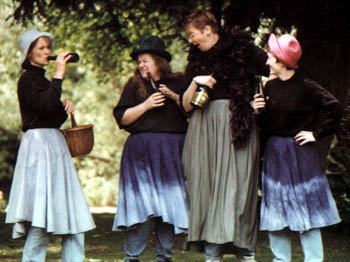 The Mysteries are over! But this website lives on as a resource for for anyone interested in what we did.

Newport Pagnell is a town in North Buckinghamshire, England, just outside the New City of Milton Keynes. We performed a specially adapted version of the Mysteries there at Easter and In June 2000.

At Easter 2000 we performed the trial and crucifixion on Good Friday, and the Ressurrection to the Ascension on Easter Sunday.

The whole mystery cycle was performed on both Saturday 24th and Sunday 25th of June 2000. The weather was on our side, except that it got a bit cool on Saturday.

On Saturday the biggest audience we had was about 60, but it dwindled towards the end of the day.

On Sunday we had at best about 160 in the audience and about 100 stayed with us right to the end of the event.

Both performances went well with only a couple of hitches noticeable to the audience in some 8 hours of presentation. Noise was a bit of a problem on Sunday with an air display at Cranfield competing with local motor-cycle racers – but soon we all learned to filter it out.

On both days the normal life of Ousebank Gardens went on around (and even among) us, unobtrusively for the most part, with children paddling and fishing in the river behind the setting for some of the scenes.

On Saturday an event at the Parish Church lead us to run the Trial scene in Ousebank gardens, but the change of plan worked well: on Sunday we reverted to the original plan and processed through the wonderfully atmospheric old cemetery to the East end of the Church for the trial.

On both days the crucifixion scenes were played as planned in the car park behind the United Reformed Church, with road closures enabling us to process both to and from “Calvary”. The audiences on both days were most appreciative and enjoyed not just the play, but the home-baked refreshments provided at Brooklands Club.

What follows is as it was originally put on-line – the editor has NOT gone through the text putting it all into the past tense.

Mystery plays originated in the Middle Ages when the local craft guilds – called “mysteries” as they guarded the secrets of the craft – performed the stories of the Bible in the streets: each guild chose a story in some way related to its particular craft. The stories were told in a down-to-earth, colloquial style so that ordinary people could appreciate them and be inspired by them. Chester, York, Coventry and Wakefield (Towneley) all have surviving mystery play cycles, telling the stories from the creation of the world to the last judgement. They are still regularly performed, though not always as a free, public “edutainment”

The Mysteries for Newport Pagnell project aims to offer the enjoyment, excitement and inspiration of the mystery plays during 2000, in public, with free access to anyone who wants to watch, be it for ten minutes or for all three hours (current estimate!).