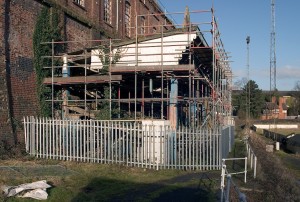 I’m ashamed to admit that although I’ve lived in Wolverton since the early-90s, I visited Wolverton Park for the first time in 2005, mainly to see the famous grandstand which was then the subject of much controversy.

The grandstand and the Park struck me as an excellent subject for a photographic study, and I recruited Paul Van den Hende to collaborate on the project. When we got round to doing anything about it we found we were only just in time! I arrived for my photographic visit (it was the sunny morning I had been waiting for) just as the developers were blocking off the entrance to the Park alongside the old bowling green.

Paul had made several visits a week or so before me, and caught his wide shots of the Park and the Royal Train Shed only just before redevelopment began in earnest and the Park became a building site.

So our photos are certainly among the last – if not the last – to be taken of the Park, and in particular the grandstand, before they changed for ever.

We have given print-size files of the photos and a PowerPoint display of them to The Living Archive to use as they see fit.