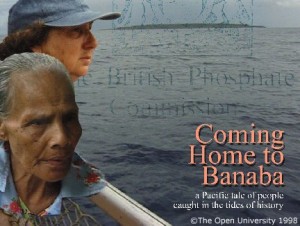 Coming Home to Banaba was screened at the 6th International Festival of Ethnographic Film at Goldsmiths College, University of London, on September 19th 1998.

Banaba is a remote and tiny island in the Pacific Ocean, about 50-miles South of the Equator, at the Western limit of the Republic of Kiribati.

Once it was known as Ocean Island, named after ship that “discovered” it. Once it was the colonial capital of the Gilbert and Ellice Islands, and one of the British Empire’s richest sources of phosphate, the raw material for the fertiliser that enriched the soil of Australia and New Zealand.

From 1900 to 1979, phosphate mining devastated Banaba, leaving a landscape of barren coral outcrops and rusting machinery.

Most Banabans now live in Fiji, two thousand miles away from Banaba, on Rabi Island (pronounced ‘Rambi’) to which the British exiled them in 1945, after three years of intense suffering under Japanese occupation.

In July 1997, a small group of Banabans and ex-miners made a return journey to the island that was once their home.