Catch up with Keith Capelin 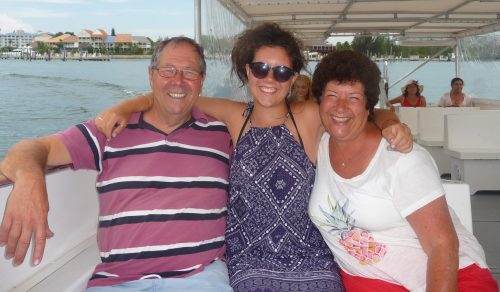 I was an academic duffer at school, just not interested – especially in maths and physics. After leaving school I started out as an apprentice electrician at J S White in Cowes, I think I was the last apprentice they ever took on. I was still an apprentice when they closed the shipyard and BHC agreed to take over my apprenticeship. I worked at Osborne in the R&D section and up at The Needles at the rocket site (which I loved). Most importantly I went to Tech College doing electronics on day release and evening classes.  I loved maths there, probably because I could relate it to what I was doing.

I was involved in The Isle of Wight music festivals and other things with the Foulk brothers. During that period I married Pam Drury (also ex-Carisbrooke) and became a dad.

After completing my apprenticeship I went into telecoms and joined STC/ITT in South London. They gave me a company car and sent me to Antwerp. Having got the travel bug and being offered money I joined a company called Seismograph Service Ltd which worked in geophysics/oil exploration with me doing instrumentation. The work was often in remote places and could alternate between places like West Africa and Northern Canada. This took me away from home, which was still on the island, almost continuously but I was a duck to water and after several years of global wandering joined another company called Exploration Consultants as a consultant.

My marriage suffered as a result of me being away so much (or perhaps when I came home!) and there were now two more daughters.

I was with ECL for 20 years and was working in the office as Technical Operations Manager and living in Wallingford and Henley on Thames for the last several years.

My second marriage failed and I re-married a third time. This time to someone I was working with and we also had a daughter.

I am now retired and living near Petersfield in the countryside. I have a large garden and lots of “boys toys” like a tractor, chain saw and log splitter to play with. I am a qualified diver but just very warm water these days. I am fortunate that my youngest daughter loves the sea and I have been able to buddy her on some exciting dives. I am also involved with adult appointments for the scouts in Chichester.